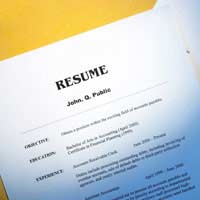 Quick - what is the difference between a résumé and a curriculum vitae (CV)? Depending on where you live and what your occupation is, your answer will vary from others'. Truly, it's a bit of a conundrum, but there are certain "rules" which apply in the résumé versus CV debate.

Are you living in the United Kingdom or any part of Europe? If so, you might be able to use the terms CV and résumé rather interchangeably, as there is little difference between the two for persons residing in the UK/EU (in fact, "résumé" is rarely used.) However, across "the pond" in the United States, the chasm between a résumé and CV can be significant, as there a CV is, essentially, a type of résumé.

In America, most professionals working in the so-called "business world" create succinct, two-page "résumés", and it's rare for many young people to even hear the word "CV" during their formative years. However, if they become interested in medicine, research, or academia, they will eventually be writing substantially involved, multi-page CVs.

Naturally, the differences between résumés and CVs are much broader than how many sheets of paper are used; specific nuances and expectations (such as scholarly listings of academic publications, residencies, and peer-reviewed articles in CVs and more "sales-oriented" achievements, skill sets, and credentials in résumés) separate the two types of documents.

However, the basic guidelines for an American résumé state that one or two pages is the maximum allowed to "sell" yourself to a prospective employer. Alternatively, the American CV (commonly used by academicians, scientists, and physicians) can contain the same amount of pages as a novella. This is due to the fact that in America, the CV contains every aspect of scholarly work that an applicant has undertaken. Rather than picking and choosing only a few key accomplishments, all the relevant and mandatory achievements and credentials are noted.

In the UK and EU, CVs can be very short or extremely long; it all depends upon who is writing the document and for what kind of position he or she is applying.

In the medical field around the globe, the comprehensive (and, subsequently, meticulously detailed) CV is the standard document used to obtain employment. Generally speaking, the same holds true for those seeking professorships and other academic posts.

However, in the United States, a sales person or accountant would never call his or her "course of life" a CV, even though in the UK or EU it would be given that moniker. Rather, in America, the title "résumé" is used for all "typical" corporate job search documents for persons who are seeking administrative positions to those searching for CEO and CFO opportunities.

Is the résumé versus CV deliberation confusing? Perhaps. But in the end, it's important to remember that if you're in any doubt about the way to present your credentials (whether you call them a résumé or CV) to a potential employer or hiring committee, it's best to make some phone calls or ask colleagues for advice. Learn all you can about the best methods to get your foot in the door so you can snag that sought-after interview.

Hobbies and Interests On a CV

How Often Should You Update Your CV?

What If You Have a Criminal Record?