Home > Interviews > Playing an Active Role During Your Next Interview 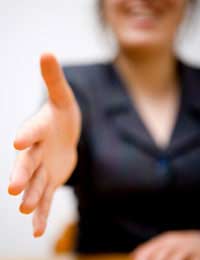 The way most interviewees follow the same orchestrated scenario is almost as predictable as the tide:

While this isn't a terrible way to conduct an interview, it's certainly not memorable or dynamic.

Instead of allowing yourself to fall into such a complacent role, make certain to play an active part during your next interview by trying some of the following tactics:

If you have a tablet and pen along for the ride, you can write down questions as you think of them as well as noting anything your interviewer says that you know you'll want to remember. Just make sure that before you begin journaling you ask your interviewer's permission to write; 99.9% of the time, he or she will actually be thrilled that you're being so diligent. (And if he or she is hesitant, perhaps it's a red flag that you're interviewing with someone who has a controlling personality.)

Is there something on your mind? Did you notice something about the company on their website that you found confusing, interesting, or troubling? Then bring it up during your interview. Obviously, you don't want to interrupt your interviewer or create controversy, but if you want to ask a question, there's no reason to stay quiet. It's always better to bring up your concerns when you're face-to-face rather than try to get responses later.

Carry a Portfolio of Your Best Samples

It's always a great idea to bring samples of your work to an interview; that way, you can whip them out and refer to them when talking about your achievements and abilities. Even if you only have examples of charts or spreadsheets that you developed to help streamline an office procedure, it's worth having them with you. Not only will they give your interviewer the opportunity to see something tangible that you've done, but they also give you opportunities to "brag" without seeming overbearingly boastful.

Request a Tour of the Workplace

If you sense that your interview is going well, there's no reason not to ask for a tour of the office. Usually, such a request will be honoured, enabling you to find out more about the workforce and the personnel. (For instance, is everyone walking around with frowns or avoiding eye contact with you? If so, this might be a stressful or toxic working environment.) One note, though - some organizations regularly deal with confidential material, so you might not get the chance to tour their facilities before coming on board.

Ask the Interviewer Questions about Him or Herself

Though you certainly don't want to get too personal, there's nothing wrong with asking your interviewer questions such as:

The way in which your interviewer answers will tell you a great deal. Watch for body language - a sudden shift in body weight or an uncomfortable cough or twitch could mean that he or she is being deceptive. On the other hand, an open, warm smile could be all you need to know about what this man or woman will be like as a boss and coworker.

Things to do After an Interview